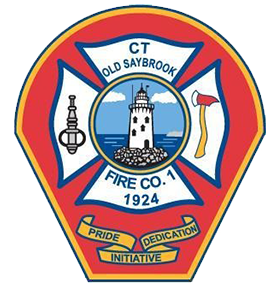 HOW IT ALL STARTED IN OLD SAYBROOK

It began with an earnest commitment; to serve the Town as volunteers against the threat of fire. In the beginning, there was only one fire truck, donated by a former resident, and a roster of 33 members who pledged their time to protect Old Saybrook from the threat of fire. It was a modest, but proud, beginning of the Old Saybrook Fire Co. No. 1. Since then, the company has grown into a highly sophisticated fire fighting force with some of the finest equipment on the shoreline, whose members are trained to fight fires and handle emergencies ranging from boat rescues to motor vehicle extrications. But it wouldn't have been possible if it weren't for that small handful of citizens in the early '20s who believed that the Town of Old Saybrook needed its own volunteer fire department. Ours is indeed a proud history, dating back to August 26, 1924, when the company was chartered under the command of its first fire chief, Gordon B. Smith. With a sole engine, an American LaFrance Chemical Engine, the fire fighting force began to grow from its initial complement of 33 charter members as of Sept. 10, 1924. Today, inside the fire house, there remains a proud testament of those early years:A brass marker that appeared on that first fire truck remains framed in the chief's office as a reminder of the continuing heritage as a volunteer force serving the Town of Old Saybrook. The first firehouse was a one-stall shed behind the Town Hall. It served the Town well, until a larger "Fire Engine House" was constructed in the late '30s, also behind the Town Hall. Today's firehouse was opened to the department in November 1961 and has served the department well ever since. Many chiefs gave their service to the Town from the old firehouse, and its red wooden letters proclaimed "Old Saybrook Fire Co. No. 1" still adorn the department's meeting room today, reminding both the old and the new that theirs is a department with a tradition of service to the public. In the '30s and '40s the department grew with new hose wagons and fire engines, forcing the Town to add another bay to the first firehouse and renovate the structure as the volunteer fire fighting force grew in size and stature. In 1949 the Town purchased a new engine that was to serve as the initial fire attack truck. That concept of having a well-equipped engine as the"first due" piece at all fires continues to this day with the department's Engine 351 serving as the "first due" attack piece.

In 1950, a year after the purchase of that initial attack truck, the department began using its first self-contained breathing apparatus, whose successor units are a vital piece of our fire fighting arsenal today. Today’s highly trained volunteers rely on their self-contained breathing apparatus for a variety of functions, from penetrating the smoky curtain of a structure fire to protecting our fire fighters in a hazardous materials situation. Ever the progressive department, the Old Saybrook Fire Co. became only the third department in the county to use radios to alert firefighters to a call. Those initial Plectron paging devices during the'50s would seem archaic compared with today's small radio pagers that every firefighter wears, but it was the beginning of a modern era for the department and it hailed the radio age that most of us now take for granted. Yet back then, those Plectrons were an essential tool in ensuring a rapid response, whenever the call, wherever it was. Today, all our officers carry two-way radios and the department relies on several radio frequencies to assist firefighters at emergencies in the town. During the early 1960s the department moved into its spacious new firehouse on Main Street. The new firehouse provided space for the department to grow and is filled today with a variety of fire fighting apparatus - three engines, a rescue vehicle, two ladder trucks, two marine units and several other vehicles. In 1999 the Town approved an extensive renovation of the firehouse that should accommodate the needs of the department for many years to come. A strong tradition of bold chiefs has enabled the department to maintain its reputation as one of the best fire fighting forces in the county.

VIEW OUR PAST CHIEFS